Remembering the Alamo: A Fight to the Death 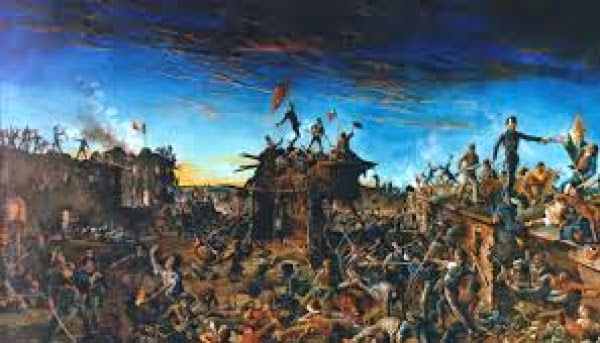 Some facts about the Alamo:189 men defended the Alamo of whom only 9 were from Texas, and they were Mexicans. At least, 34 had been born overseas mostly in Britain, and all but 25 were volunteers.The bagpipes were played at dawn and dusk on everyday of the siege.

One man crossed the 'line in the sand' drawn by Travis that he said would allow them to leave the Alamo before the attack began without repercussions. He was Louis 'Moses' Rose, a French veteran of Napoleon's invasion of Russia. He has been known ever since as the 'Coward of the Alamo.'

The final assault began at 5.30 in the morning in total darkness.

The Texan sentries all had their throats cut before they could raise the alarm,

Both Bowie and Travis's slaves survived the battle as also did Brigido Guerrero, who claimed that he was a Mexican soldier who had been captured earlier in the fighting.

One defender, Henry Wardell, escaped over the wall during the fighting but died some months later from his wounds.

A number of women and children were also captured, and all the prisoners were given two silver coins, a blanket,, and escorted from the camp.

The Alamo was not the greatest massacre of the Texan Revolution, more than 350 Texans were executed at the town of Goliad having earlier negotiated their surrender.

Vengeance is mine - at the decisive Battle of San Jacinto on 21 April 1836, some 650 Mexican soldiers were killed after having lain down their arms. 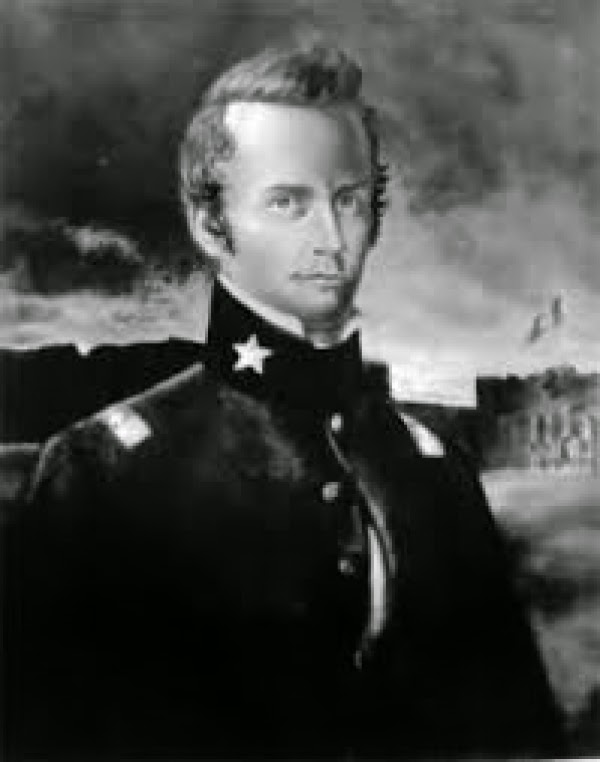 William Barret Travis, the man who had been placed in temporary command of the Alamo was vainglorious, pompous, and arrogant but also courageous. He had earlier deserted his wife and child and had since kept a detailed diary of his sexual conquests.

He was one of the first to die at the Alamo shot through the head as he ascended the ramparts. 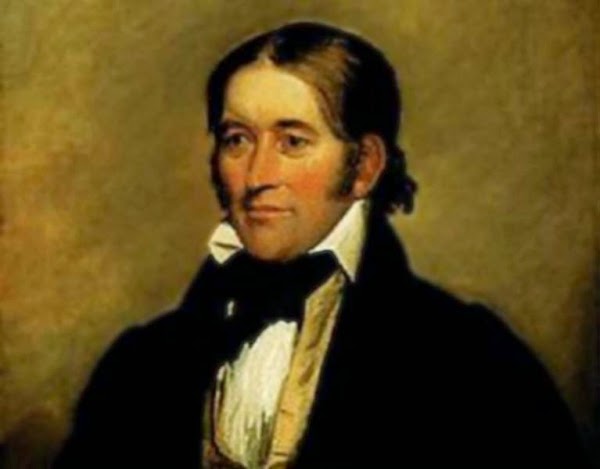 Davy Crockett was a legend in his own lifetime, the famous backwoodsmen and ex-Congressman arrived at the Alamo with his 14 Tennessean volunteers having told his constituents who had just rejected him - You can go to hell, I am going to Texas! He had a killing in mind, but of the financial kind.

Some say that he was executed on the express orders of Santa Anna having surrendered as the battle reached its denouement. Others that he died heroically surrounded by the corpses of his enemy. 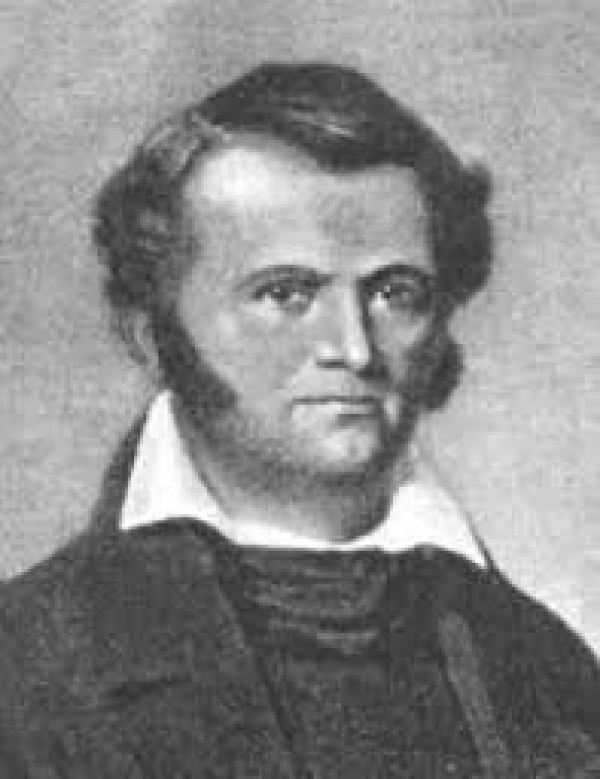 Jim Bowie was a slave trader and a land speculator with a ferocious reputation who once killed a man in a fight dragging him to the ground and disemboweling with his famous Bowie Knife that had been invented by his brother Reza, despite having been stabbed in the chest and shot three times.

He had since married into the Mexican aristocracy and become very rich.

He died at the Alamo in his bed where he was dying from consumption. It was said that the bayonets had been thrust so deep into his body that it was possible to raise him into the air. 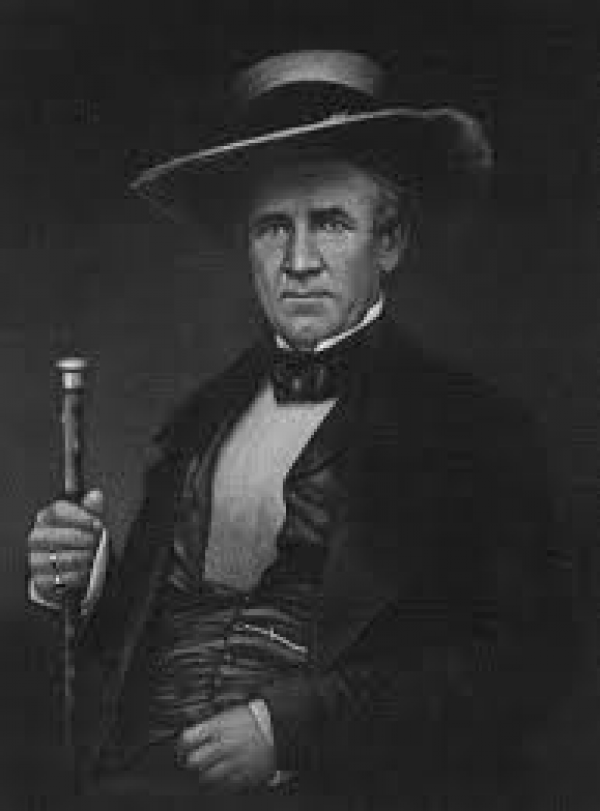 Sam Houston, the victor at San Jacinto and first President of the independent Republic of Texas.

The Travis Letter sent from the Alamo during the siege: 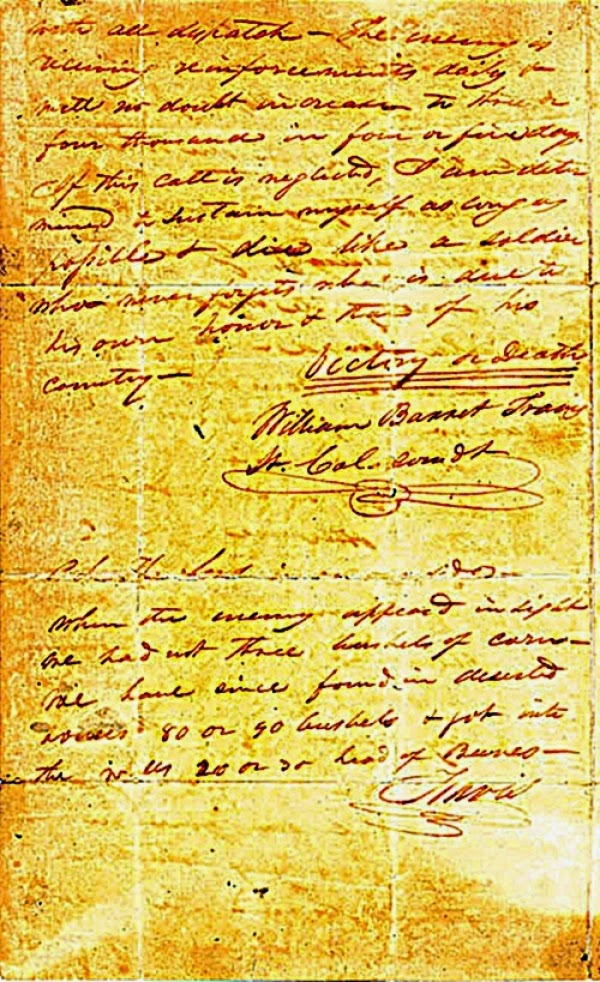 "I call on you in the name of liberty and patriotism and everything dear to the American character to come to our aid with all dispatch. The enemy is receiving reinforcements daily and will no doubt increase to three or four thousand within four or five days. Then, if this call is neglected I intend to sustain myself as long as possible and die like a soldier who never forgets what is due to his honour and that of his country - Victory or Death.


Posted by Prisoner of Eternity at 09:58 No comments: 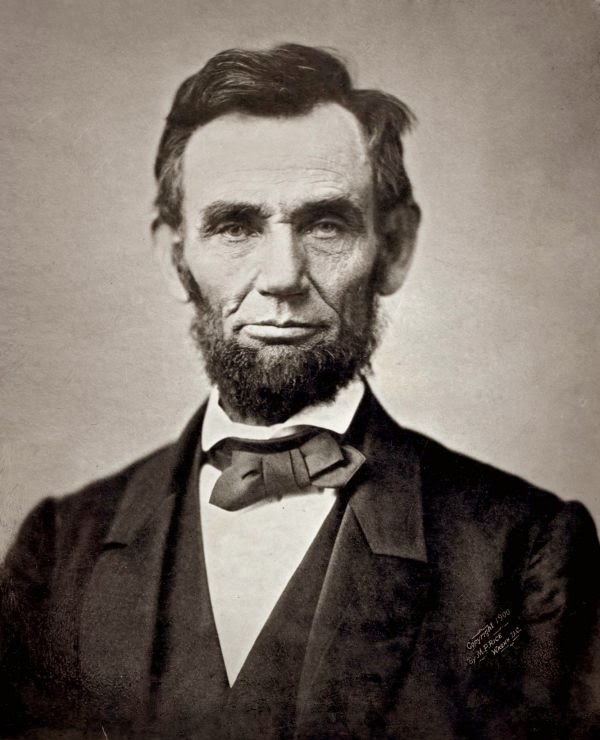 In the first week of July, 1863, the bloodiest battle ever fought on American soil took place near the small town off Gettysburg in Pennsylvania.

Its aftermath left 9,000 men dead on the field and 27,000 others wounded many of whom would die later, with 10,000 unaccounted for, but it proved a decisive Union victory, even if one bought at a terrible price.

Four months later on 19 November President Abraham Lincoln travelled from Washington to give a dedicatory speech at the new military cemetery being constructed on the site of the old battlefield.

Despite the victory at Gettysburg and the capture of Vicksburg on the Mississippi the same day the war dragged on, casualty figures remained unimaginably high, and still there appeared no prospect of an imminent end to the war.

The man to blame was the President, Abraham Lincoln, little respected or admired, considered coarse and ill-educated by many, and believed to be unequal to the task of war leader.

But one short speech given that day at a scene of great carnage, a speech dismissed at the time as being disrespectful for its brevity, would change that opinion forever.

In the days prior to travelling to Gettysburg, Lincoln had been ill.

He was feverish, physically weak, and his breathing poor. Indeed, his appearance and condition was much commented upon.

He was described as looking drawn and haggard with a ghastly colour giving him a mournful appearance that was perhaps appropriate to the occasion but did little to inspire confidence.

It has since been suggested that the length of his speech was dictated by his physical inability to give much more.

The President was not to be the main speaker that day, the principal address at Gettysburg was to be given by Edward Everett, the former Governor of Massachusetts and the best known orator of his day.

There was much excitement in Gettysburg that the President was visiting and would say a few words, and the town turned out in force. 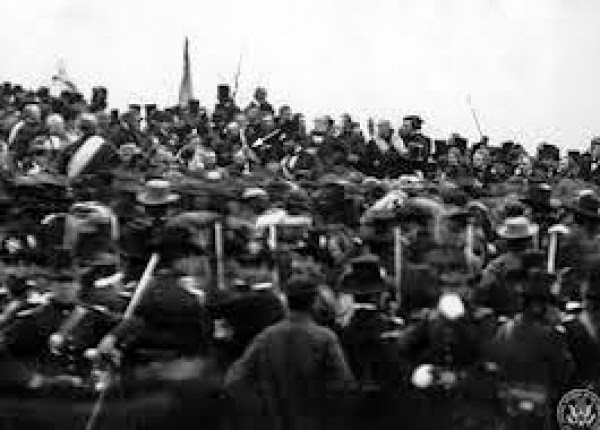 Indeed, the people so crowded around Lincoln that a space had to be created for him, though being so much taller than most of those present he was not a difficult man to pick out.

Upon the completion of Edward Everett’s oration it was time for the President to say a few words, though most of those in attendance could not have imagined just how few.

Despite clearly being unwell, Lincoln spoke in a distinct and loud voice: 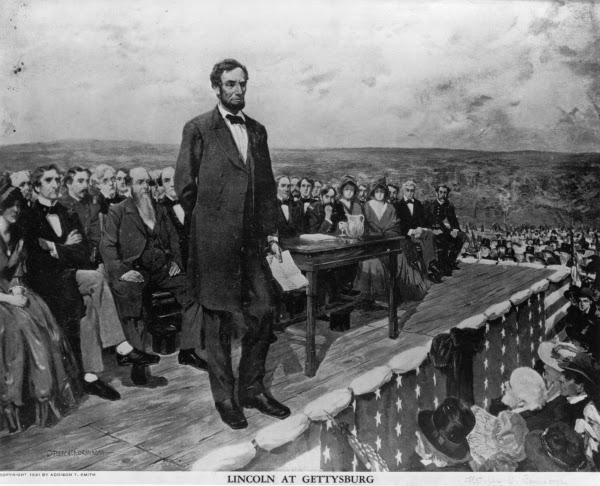 “Four score and seven years ago our fathers brought forth on this continent a new nation, conceived in liberty, and dedicated to the proposition that all men are created equal.

Now we are engaged in a great civil war, testing whether that nation, or any nation, so conceived and so dedicated, can long endure. We are met on a great battle-field of that war. We have come to dedicate a portion of that field, as a final resting place for those who gave their lives that a nation might live. It is altogether fitting and proper that we should do this.

But in a larger sense, we cannot dedicate, we cannot consecrate, we cannot hallow, this ground. The brave men, living and dead, who struggled here, have consecrated it, far above our poor power to add or detract. The world will little note, nor long remember what we say here, but it can never forget what they did here. It is for us the living, rather, to be dedicated here to the unfinished work which they who fought here have thus far so nobly advanced. It is rather for us to be here dedicated to the great task remaining before us – that from these honored dead we take increased devotion to that cause for which they gave the last full measure of devotion – that we here highly resolve that these dead shall not have died in vain – that the nation, under God, shall have a new birth of freedom – and that government of the people, by the people, for the people, shall not perish from the earth.”

The reaction to his speech was mixed at best.

Some of those present remembered it being greeted in utter silence, others that there was a small smattering of applause. Lincoln’s bodyguard recalled that the President said to him that like - a bad plough this speech won’t scour.

Certainly Lincoln thought that he had said too little and that he had let everyone down.
The following day Edward Everett wrote to Lincoln:

“I should be glad if I could flatter myself that I came as near to the central idea, of the occasion, in two hours as you did in two minutes.”

The reaction of the press however divided on political lines but was generally underwhelming and in some quarters scathing. The Democrat-leaning Chicago Times wrote that:

“The cheek of every American will tingle with shame as he reads the silly, flat, and dish-watery utterances of the man who has to be pointed out to intelligent foreigners as the President of the United States.

Is Mr Lincoln less refined than a savage? It was a perversion of history so flagrant that the most extended charity cannot view it as otherwise.”

The London Times was similarly scathing in its summation:

“The ceremony was rendered ludicrous by some of the, sallies of that poor President Lincoln. Anything more dull and commonplace it would not be easy to produce.”

The Providence Daily Journal however wrote:

“We know not where to look for a more admirable speech than the brief one the President made. It is often said that the hardest thing in the world is to make a five minute speech. But could the most elaborate and splendid oration, be more beautiful, more touching, more inspiring than those few words of the President.”

Abraham Lincoln had been the most divisive President in American history not only because he was hated in the South as the cause of war but many in the North were little less hostile to his perceived failings, his opposition to slavery, and his obstinate refusal to negotiate an end to the war less than total victory.

He was tall, and ungainly, his homespun homilies irritated more than they amused and he appeared in every way unfit for high office. How could this man ever be President at all let alone at a time of great national crisis?

Many thought his brief, if not terse, oration at a ceremony to honour those who had given their lives in the cause of Union to be not only insulting but emphasised once again that he was little more than an illiterate country bumpkin out of his depth.

Subsequent events, the verdict of history and a few words that said so little but meant so much, has long since proved them wrong.
Posted by Prisoner of Eternity at 12:16 No comments: