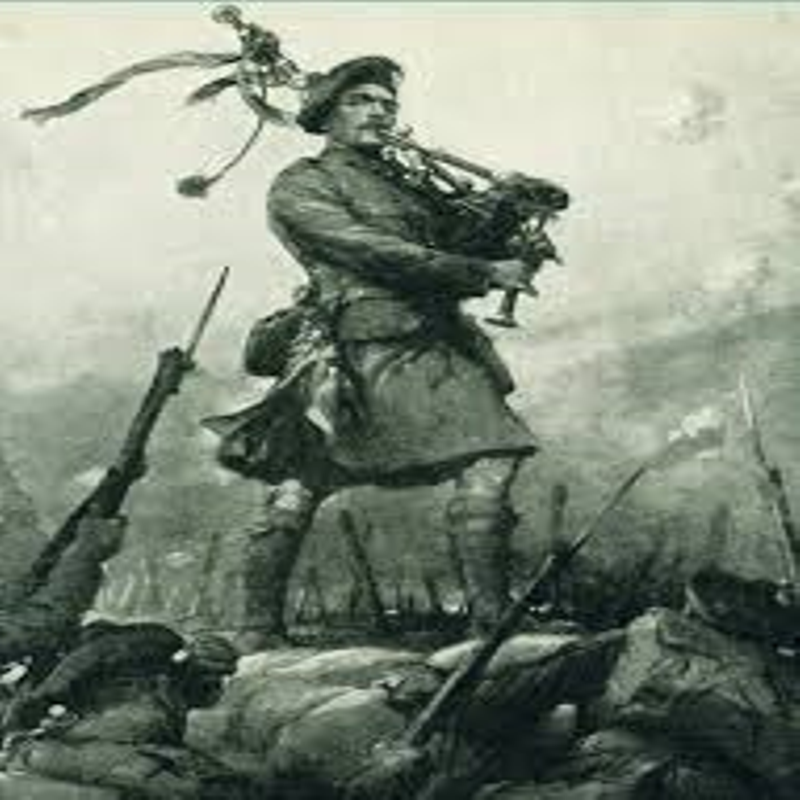 On 25 September 1915, as troops of 7th Kings Own Scottish Borderers waited to go over the top they came under gas attack throwing them into confusion.Piper Daniel Logan Laidlaw was ordered by his Commanding Officer to play to restore discipline in the ranks.

He mounted the parapet and walked the length of the trench playing 'All the Blue Bonnets over the Border.'

Order was restored and the attack went ahead as expected. 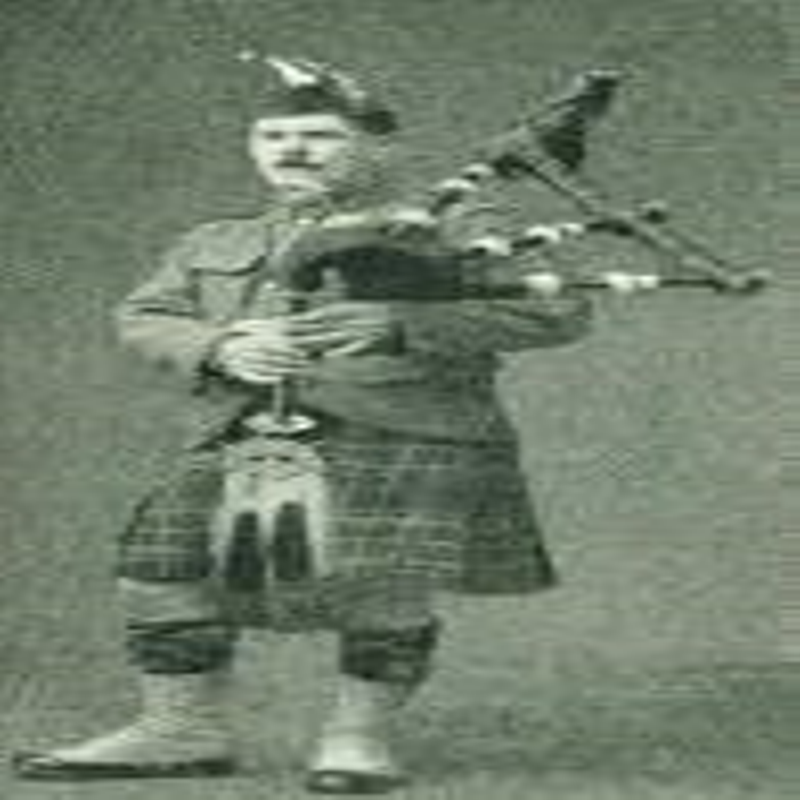 Laidlaw continued to play during the assault but was shot down as he approached the German trenches.

He survived and was later awarded both the Victoria Cross and the French Croix de Guerre.

More than a thousand Pipers from Scottish Regiments were to be killed during the war. 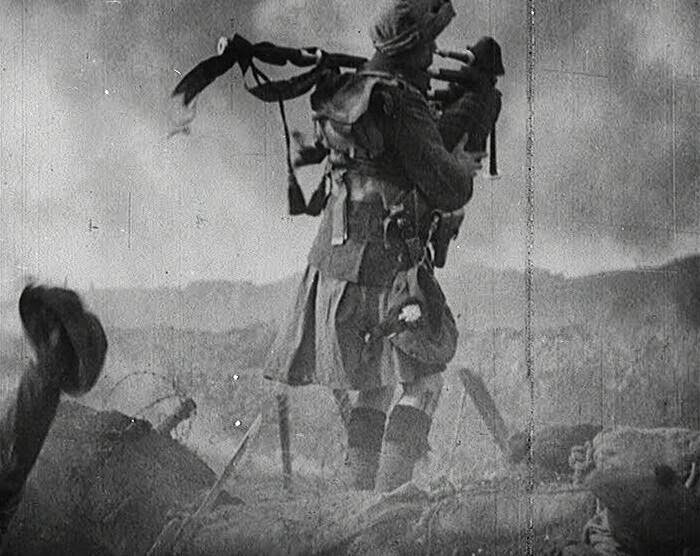 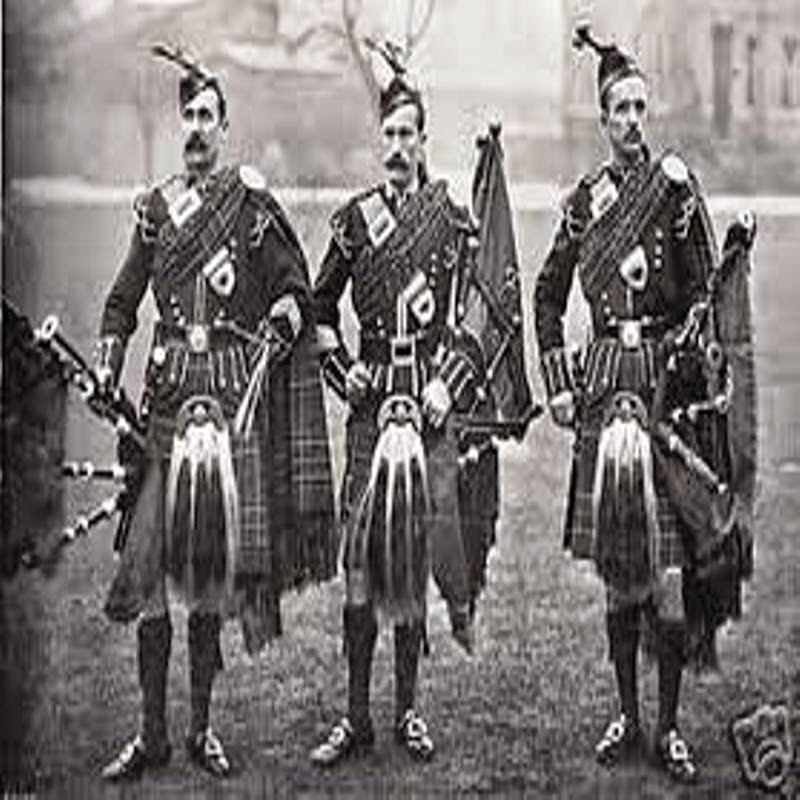 Posted by Prisoner of Eternity at 19:34 No comments: 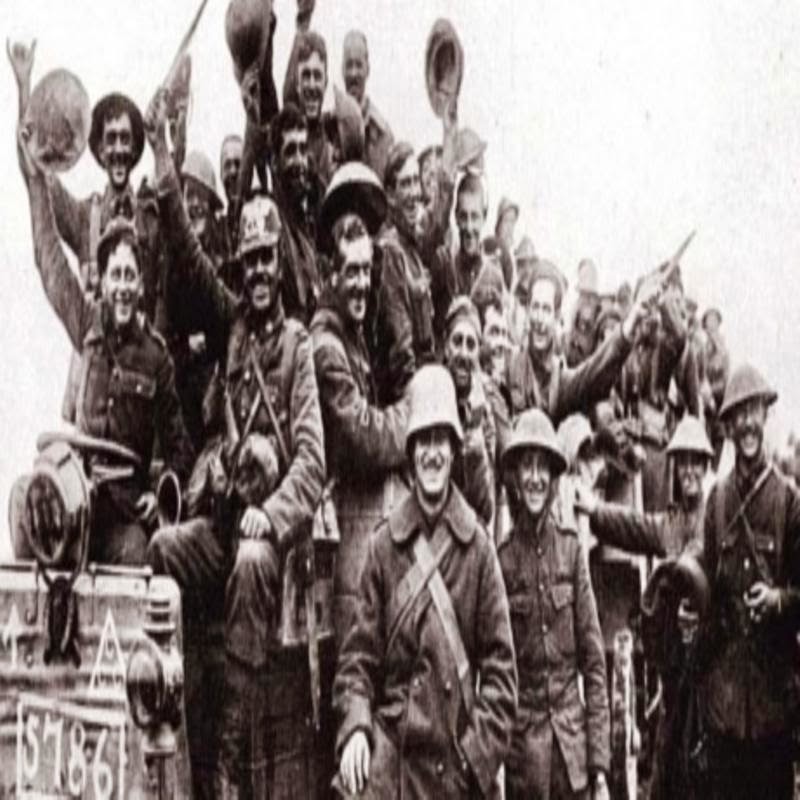 By December 1914, just six months into the greatest clash of arms the world had ever seen more than a million men had already died on the Western Front.

What had begun as a great German advance through northern France toward Paris had been halted and rolled back and the mobile tactics of the early months had long since descended into the static and deadly sterility of trench warfare.

As the first Christmas of the war approached and with the opposing forces in some places less than 70 yards apart the Commanders on all sides became aware of the dangers of fraternisation for just as easily as insults could be exchanged across the front-line so could seasonal greetings and messages of peace.

Such a thing if it were to occur would set a dangerous precedent, and had to be prevented.

On 5 December 1914, General Horace Smith-Dorrien, the Commander of the British II Corps issued the order:

"Friendly intercourse with the enemy, unofficial armistices, however tempting and amusing, are strictly prohibited".

When Pope Benedict XX requested that:

"All Nations cease their clash of arms while Christendom celebrates the Feast of the World's Redemption".

The Germans greeted the request favourably but Britain and France refused to comply with any unofficial cessation of hostilities.

Despite this on the evening of 24 December 1914 the guns on many sectors of the Western Front fell silent.

The Germans had earlier placed small Tannenbaum Christmas Trees above their trenches and their decorations glistened in the fading early evening light.

As the night wore on the sound of Carols being sung could be heard wafting across the desolate wastes of no-man’s-land with Silent Night a particular favourite.

After every song the British would applaud and cry out for more before reciprocating with some Carols of their own.

But the war had not ceased - on Christmas Eve, 98 British soldiers were killed, mostly by sniper fire.

On the Armentieres sector of the front as the sun rose on a crisp but bright Christmas Day morning something extraordinary happened. It was described by an Officer of the Gordon Highlanders:

"The men were having breakfast when a cry went up that the Germans had left their trenches. Springing to arms they could scarcely believe their eyes when they looked over the parapet and saw a number of the enemy standing in the open in front of their trenches, all unarmed. Some of the enemy shouted No Shoot! After a while a number of our men left the trench and began to walk toward them." On another sector a small group of German Officers approached a British trench. They were met in no-man’s-land by the British Officer in charge with whom they shook hands and greeted with the words, said in perfect English - "We thought it was only right and proper to wish you all a very Merry Christmas". 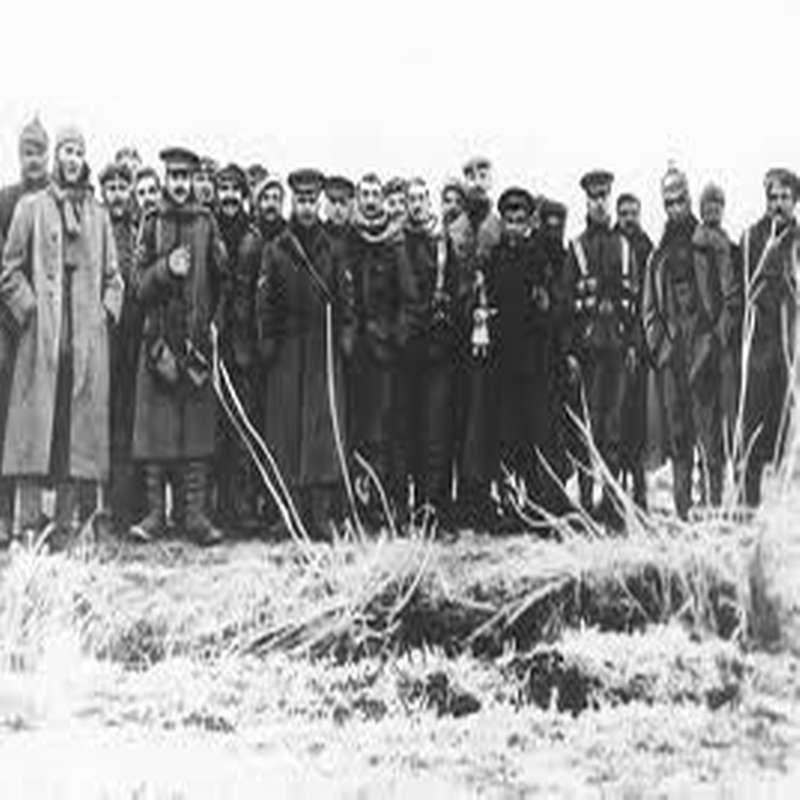 Such incidents were occurring all up and down the Front Line, sometimes they were the result of negotiated agreements that allowed both sides to collect their dead from no-man’s-land in other places the firing simply ceased. 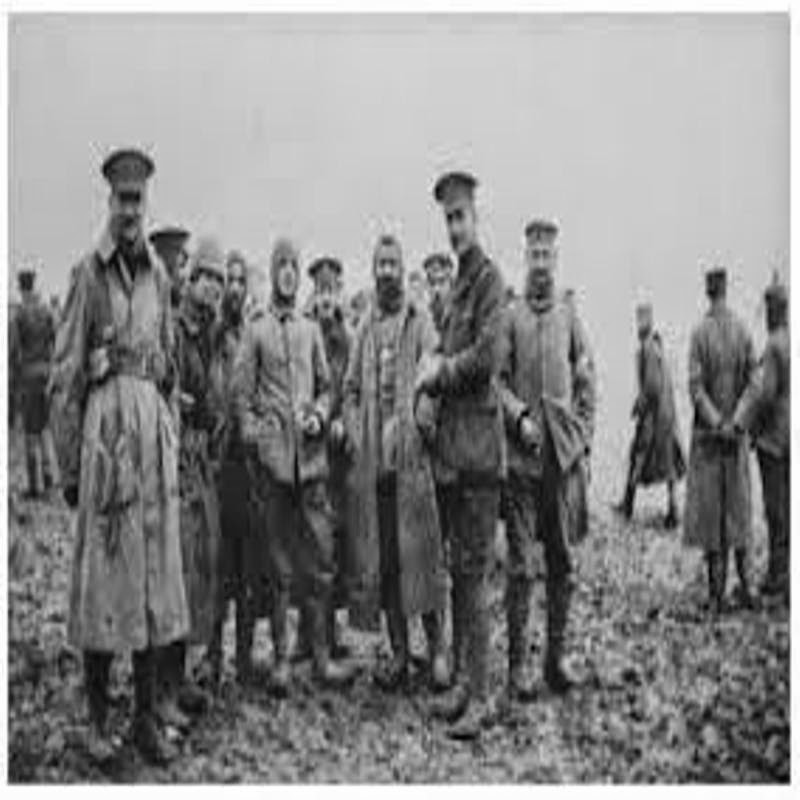 Elsewhere, British and German troops openly fraternised swapping gifts and exchanging addresses, they also shared coffee and cigarettes and some British Officers allowed themselves to be photographed standing alongside their German counterparts. 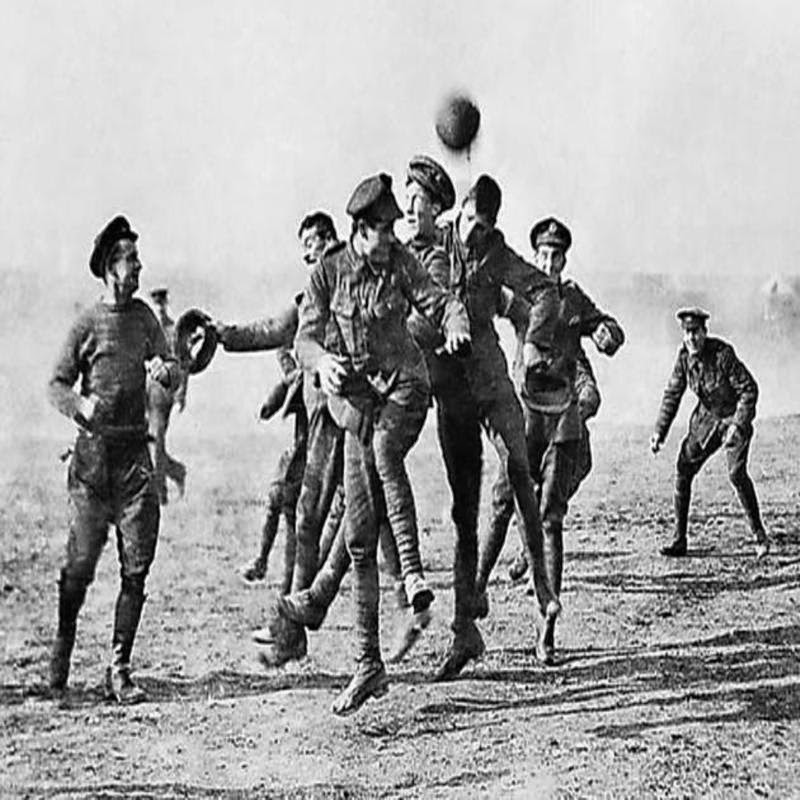 A football was provided by a Gordon Highlander and in the ensuing match, properly officiated, the Germans won 3-2.

But still the war continued - and on Christmas Day, a further 81 British soldiers were killed.

On Boxing Day the British and German troops again met in no-man’s-land and agreed not to fire upon one another but when Staff Officers visited the front later in the day they were shocked by the calm and quiet and ordered that the firing recommence immediately. It did, but both sides deliberately fired above the heads of the other.

And so on Boxing Day - a further 62 British soldiers were killed.

The unofficial truce lasted in some places until 3 January 1915 when the Commander of the British Expeditionary Force Sir John French found out about it and exploded in fury. He wrote in his memoirs:

"I issued immediate orders to prevent any recurrence of such conduct, and called the local Commanders to strict account".

German Units that were known to have fraternised with the enemy were transferred to the Eastern Front and their Officers accused of being cowards, in some cases they were even court-martialled and cashiered out of the service, or demoted.

The response of the English and French was just as firm but more muted, it being thought better not to dwell on it should it ever happen again.

The war was ordered to recommence but neither side fired until a time agreed by both sides.

The Christmas Truce was over but it had been a brief moment of humanity in an inhumane world, of sanity in that most insane of wars.

Posted by Prisoner of Eternity at 11:15 No comments: 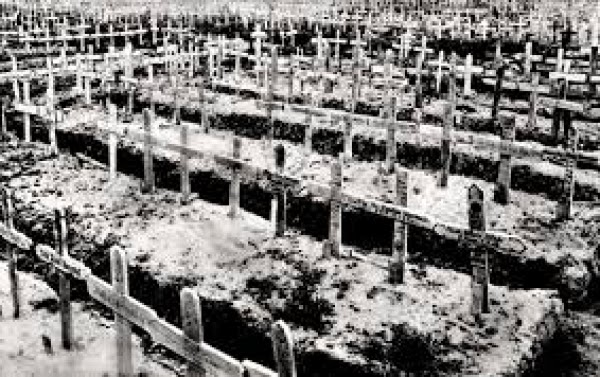 On 21 February 1916, after a massive bombardment the German Army advanced on Verdun. Its Commander, Erich von Falkenhayn believed the French would sacrifice everything to defend this fortress town on its eastern frontier, its legendary bastion against Germanic incursion.

He told the Kaiser:

"The strain in France has just about reached breaking point, a mass breakthrough which is in any case beyond our means, is unnecessary. Within our reach are objectives for the retention of which the French General Staff would be compelled to throw in every man they have. If they do then the forces of France will bleed to death."

He believed that as the French counter-attacked time and again to recapture the sacred soil around Verdun he would break up and destroy their army with his heavy artillery, the more than 1,200 howitzers, trench mortars and other assorted guns.

He would bleed the French Army white.

It was to be the great clash of Teuton against Gaul.

It had never been von Falkenhayn's intention to capture Verdun but merely compel the French to defend it but early success including breaking through the French second line on the third day of the advance and the capture on the 27th of Fort Douamont, supposedly the most formidable fortress in the world without a shot being fired enthused those Commanders on the ground with the prospect of imminent victory.

The strategy changed accordingly, but it wasn't to be.

They had bled each other white,.

In the end - nothing had changed. 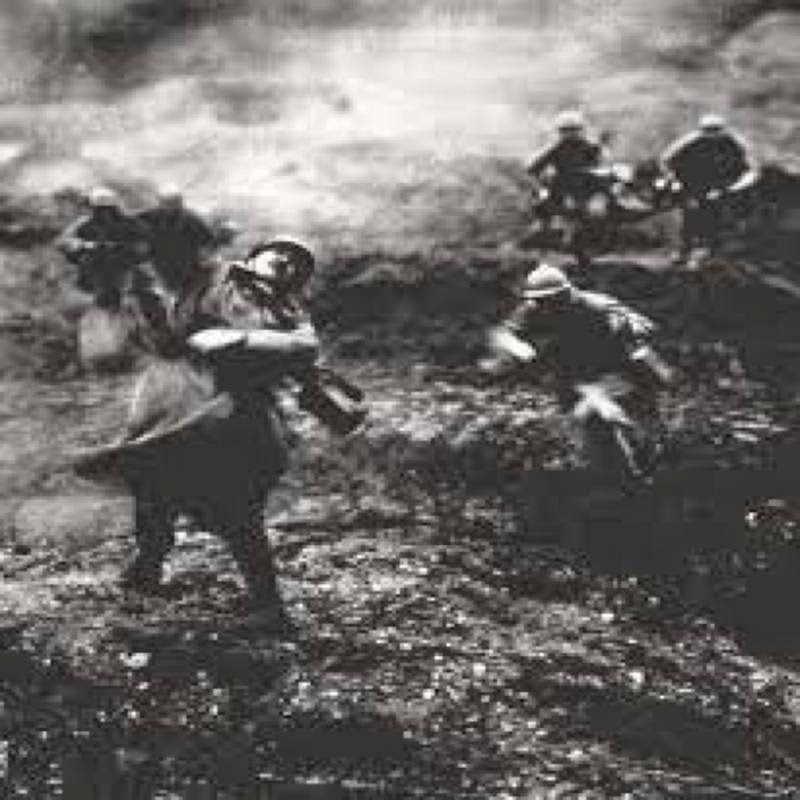 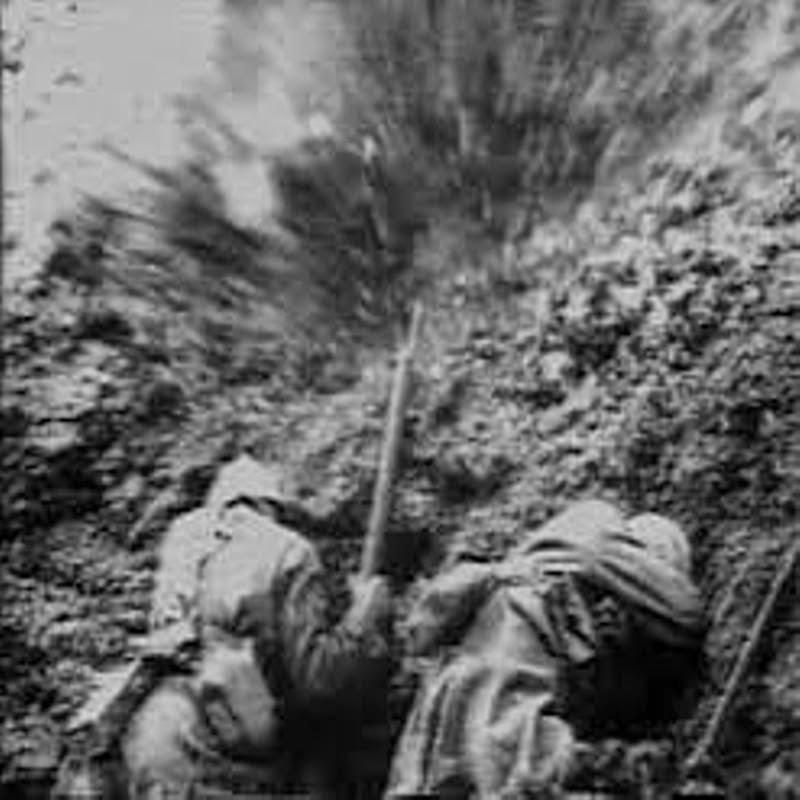 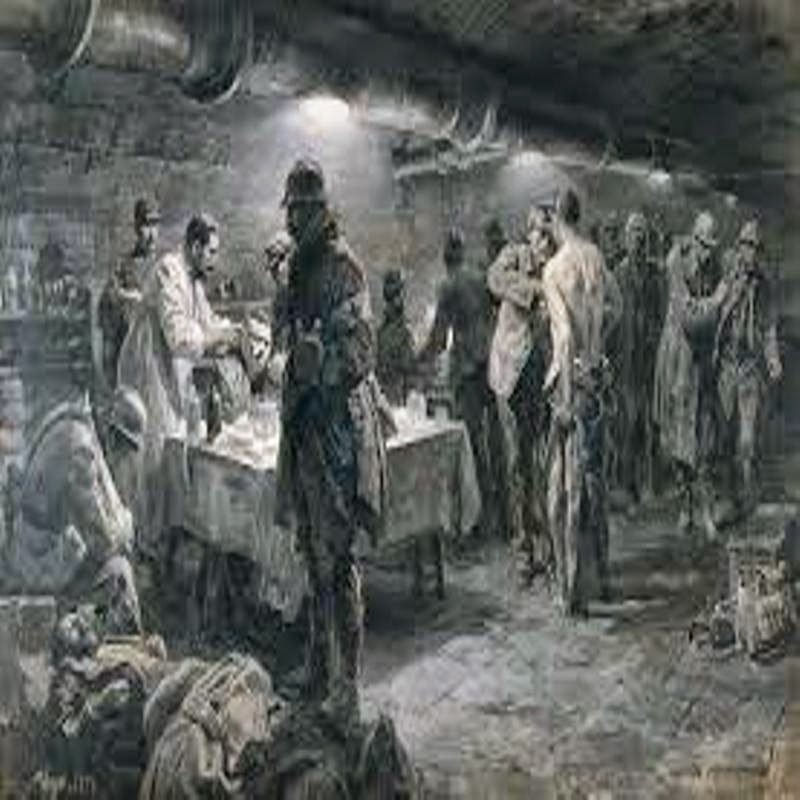 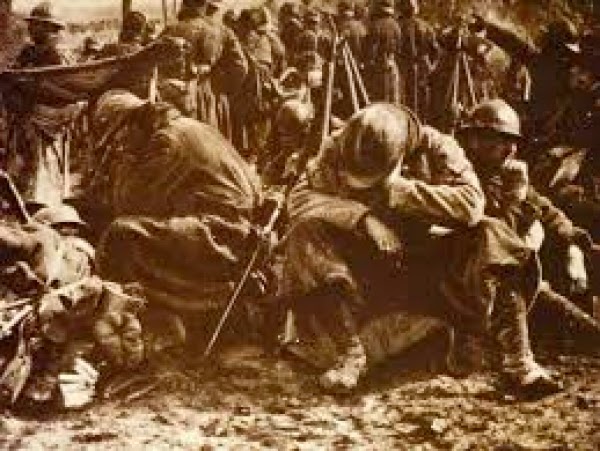 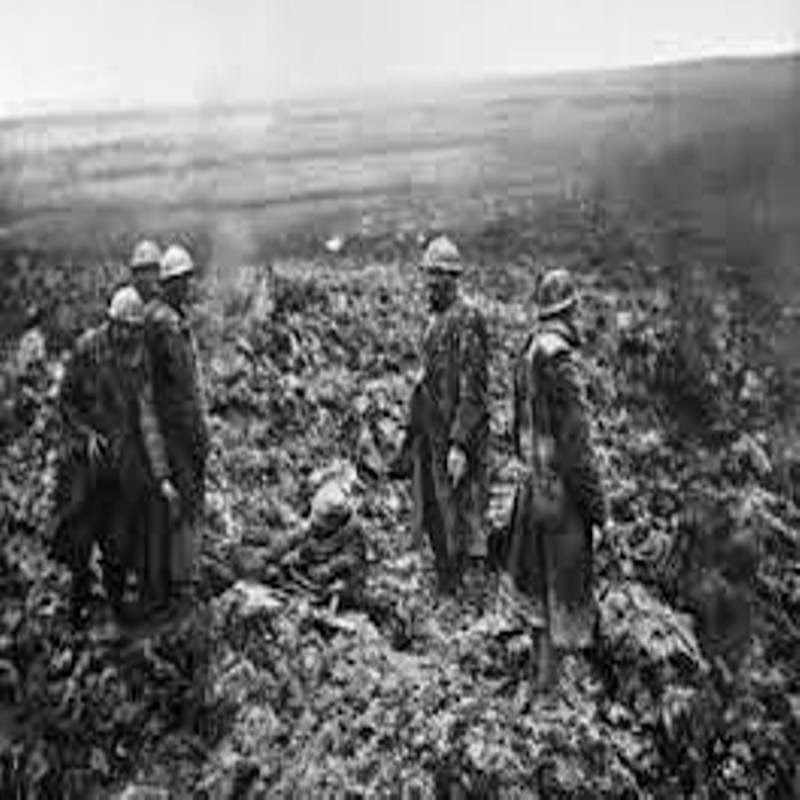 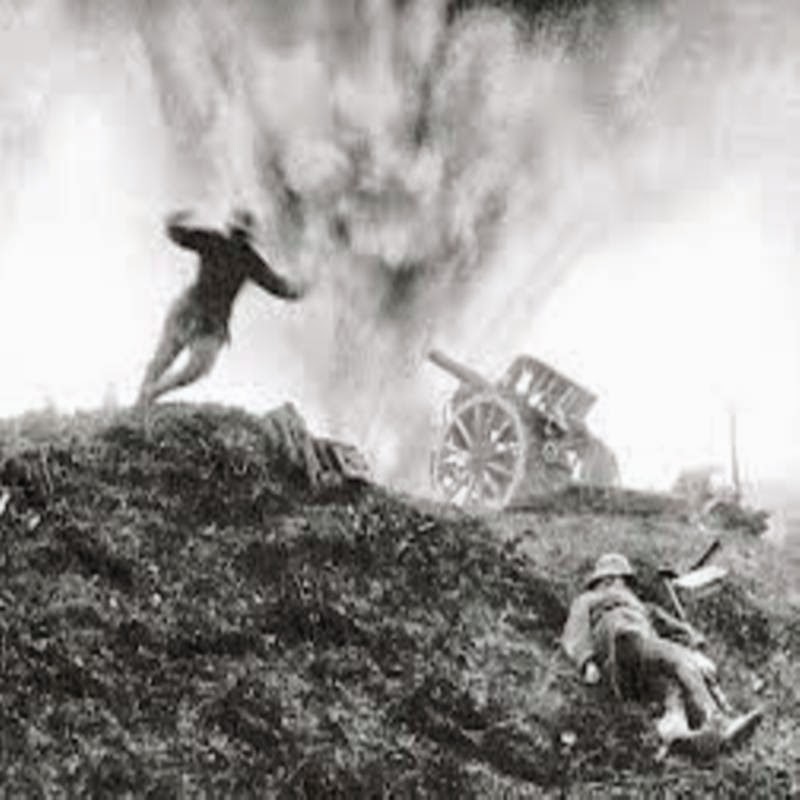 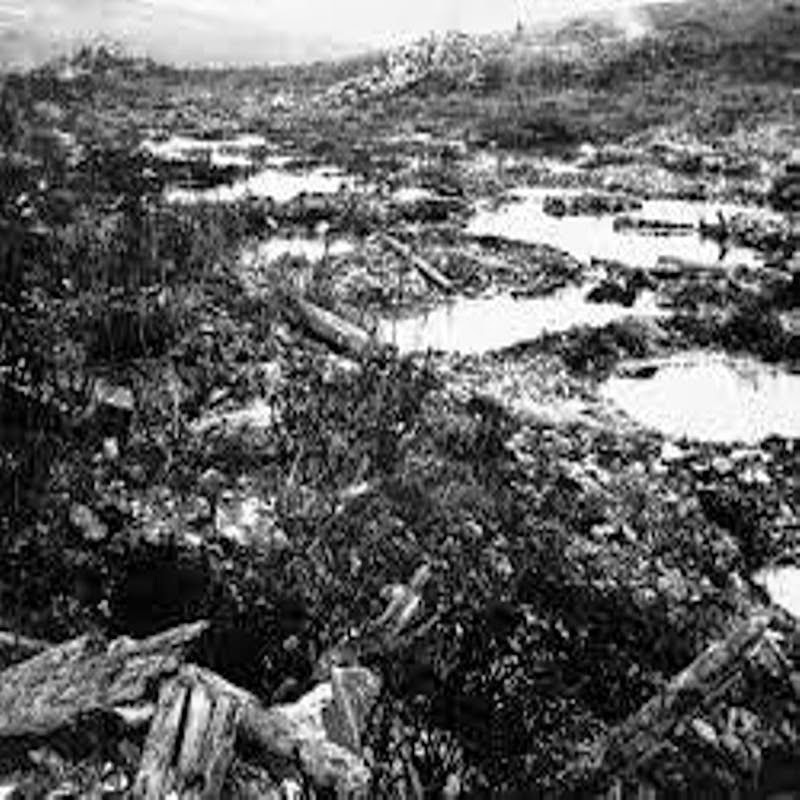 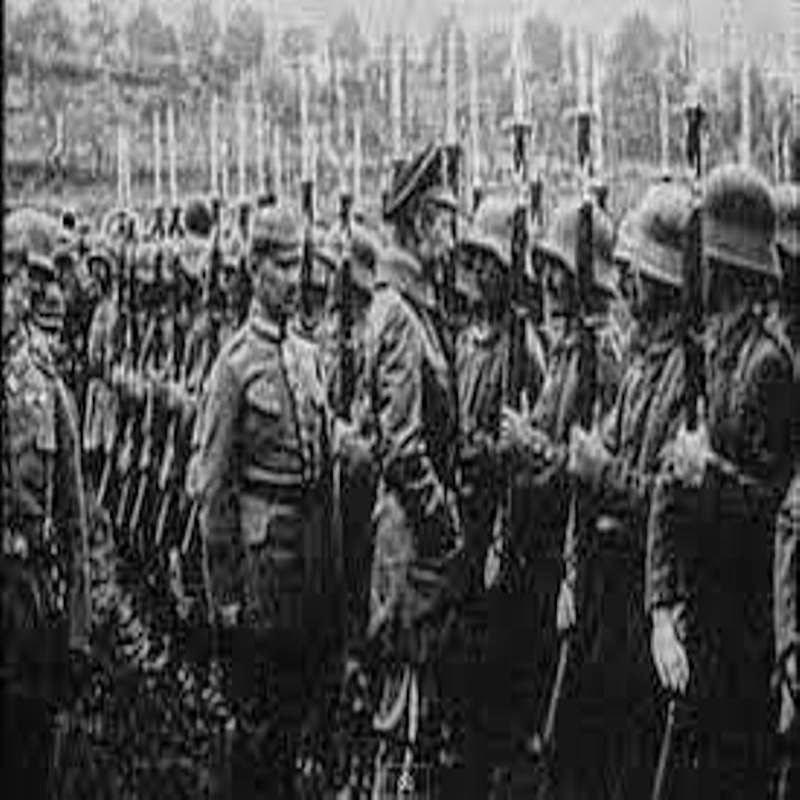 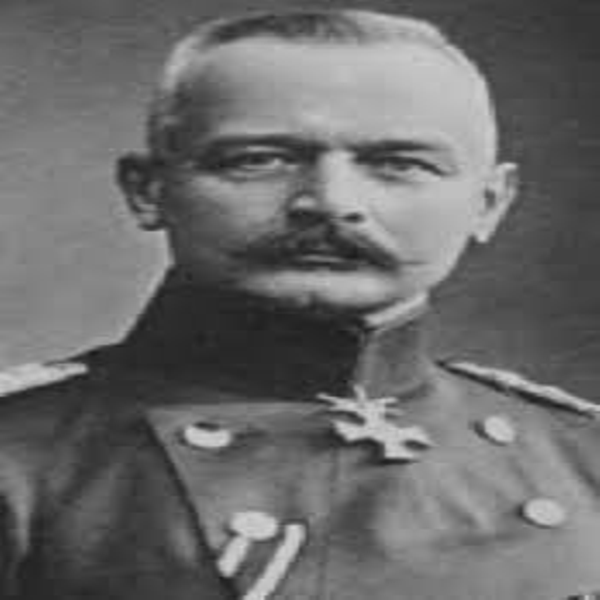 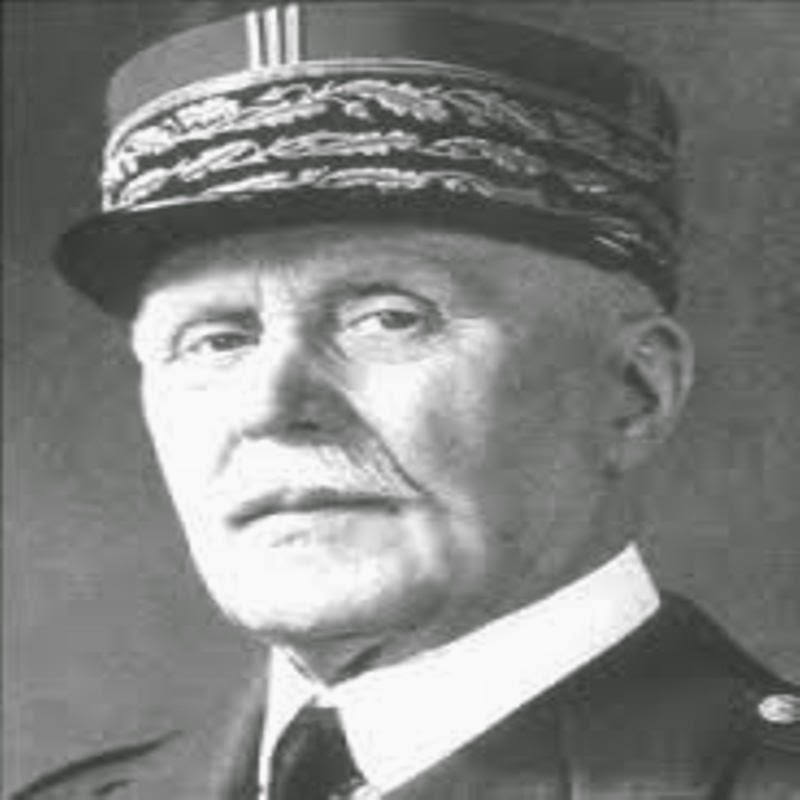 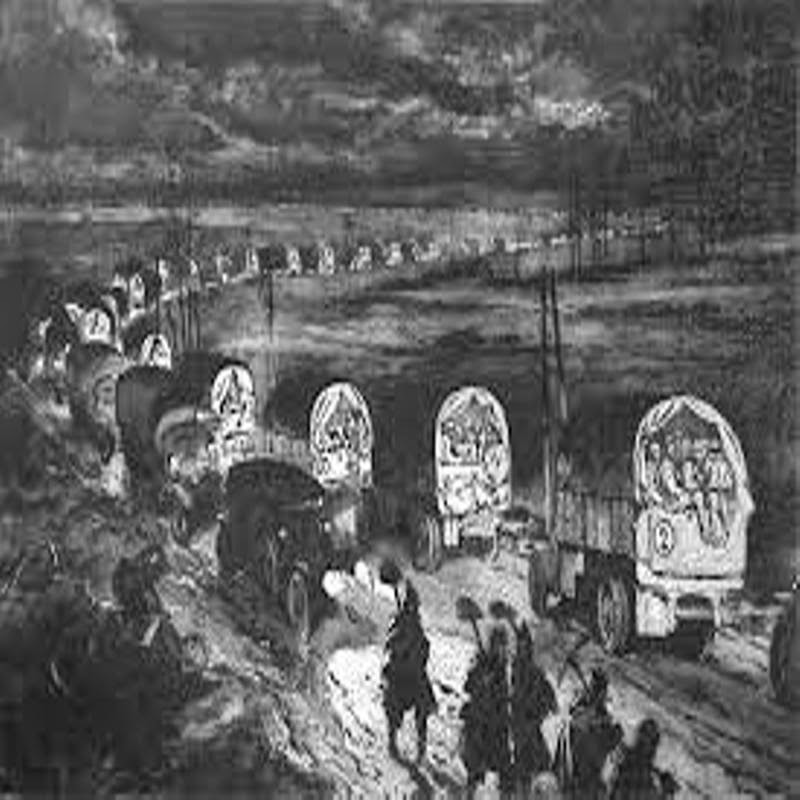 Posted by Prisoner of Eternity at 19:12 No comments: